A recap on some of my favourite games from Essen this year:

Although I heard little more from the Modiphius team about their Conan RPG that you don’t already know if you receive their newsletter, except that it’s due to be finished in a month or two, I did get to speak to Frederik Malmsburg, owner of the Conan and wider Robert E. Howard properties, about his plans. Not only is he a really wonderful, charismatic guy (Fred, not Conan), but he clearly loves what he does and proves that Howard’s legacy is in really good hands. Fred told us how his current plans are to explore TV options for Conan that allow them to stick closer to the original canon, now that Game of Thrones has paved the way for fantasy on screen. If such a series turned out successful, he could build on that success to bring Solomon Kane and even El Borak to the screen. Another Conan movie, he said, is not a dead project. Arnie is still there and interested, but getting that kind of project greenlighted takes a lot of work.

Modiphius: Kung Fu Panda and Siege of the Citadel

One of the most anticipated games of Essen this year was Modiphius’s reboot of the age old classic Mutant Chronicles: Siege of the Citadel, which was recently launched on Kickstarter. Although the game wasn’t ready to see at the show, fans got a chance to see the game in action at Modiphius’s Community Party, which they throw every year nearby to launch their newest products. As you can see from the photograph, the game is compatible with many of the components from the old game, which were used for the test game at the party. The rules have had a major update though, and extra scenarios have been written to make the game even more exciting than ever. 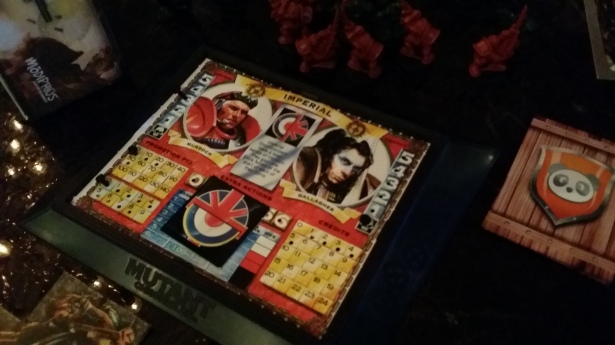 Just as anticipated—which I found completely surprising—was the Kung Fu Panda game which Modiphius has been developing for just over a year now. When I saw the game last year, I was doubtful that the game was simple enough for kids to understand, because it was a real time dice rolling game like, for example, Escape from the Temple, but after seeing a lot more games using that mechanic and seeing the updated alpha version this year I’ve changed my mind on that. For one thing, the game has been simplified so it runs much more smoothly. Effectively, you are attempting to roll dice combinations in order to defeat the enemies on the board while the sand timer slowly trickles out, with each character needing different combinations. Each claw symbol you roll moves the enemies closer to you as them move along a track drawn on the board, and once they come into contact with you, each claw becomes a wound, locking the dice. If you end up with all your dice locked, you’re wounded, and can’t do anything until the sand timer is reset. It’s definitely a lot of fun, and with enemies now moving on tracks it’s a lot quicker and simpler to play—and the boards will look nicer for it. 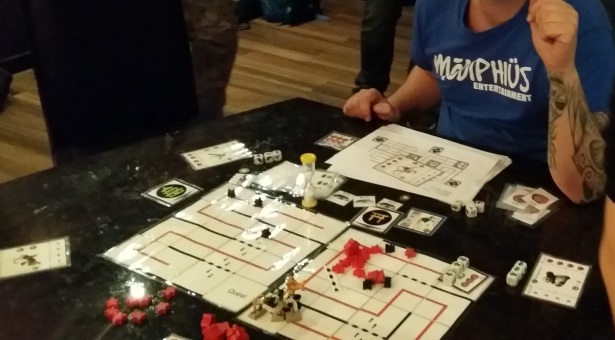 Like a lot of people, I’m naturally drawn to the zombie genre, but I have to say I’ve usually been disappointed with games building on that theme. Z War One, though, really caught my attention. It uses much deeper, more tactical mechanics that really make it a much more immersive experience than, say, Zombicide. Each scenario is different, providing a unique experience each time, and is balanced to ensure that if you succeed, you do so really by the skin of your teeth each time, which makes for a real nail biting experience, even when your only opponent is the game itself.

What really got me excited, though, was the different play modes, just like those “video games” I used to play before high quality board games became a thing. You can play against the game cooperatively, or you can up the difficulty and have another player play “the director,” taking control of the zombies and working against you. Even better, if you buy at a con like Essen, you get extra rules for playing an old school deathmatch against another player. Awesome stuff.

If I had to recommend just one game from Essen this year, this one would be it.

Blood Bowl is at the top of the list of many people’s all time favourite games. With dozens of teams to choose from, Blood Bowl’s asymmetric gameplay is endlessly interesting, and its light, tactical rules make each game and each team unique. The new edition has been beefed up to the 40mm standard preferred by most Blood Bowl leagues, but the rules remain the same. And of course the new models are gorgeous. The game comes with a set of dice for each player, including a d16 for random player selection, which previous editions lacked. Even better, all the components (apart from of course the boards) are made from Games Workshop’s own plastic, which not only makes everything higher quality but keeps everything in-house. All in all, this is one hell of a revival of one of the most beloved games of all time, and really shows Games Workshop is continuing its recent trend of listening to its community.

Although we didn’t get a chance to play Lobotomy, we did see it on the gaming table, and it looks awesome, and for an awesome price. For just €80, you get loads of models, a beautiful gaming board, and tons and tons of tokens, cards and scenery. I was actually jaw-droppingly surprised at just how much you got for your money. It’s a game about escaping from an asylum which, at least in the heads of the escapees, is being taken over by demons. If you’re thinking of getting it, it’s a definite buy. Go for it.

I have to admit, I wasn’t super impressed with Argo, but it’s the simple gameplay that got me to buy it. In Argo, you take control of five astronauts who have awoken from cryo only to find their ship under attack from aliens, with each astronaut having his or her own special ability. Your other players each have a set of astronauts just like yours, with your goal being to get your guys to the escape pods while scoring as much points as possible. The game starts to get very crowded very quickly, meaning that as your dudes are running around you’re pushing and shoving other player’s characters around, into rooms where aliens are waiting to eat them, into teleporters, and other hazards. In Argo, the real danger aren’t the aliens, but your other players. It’s the kind of simple, strategy-based game that I just love, and plays in about 20 minutes.

I really wanted to like this game, because so many people have been raving about it. And to be honest, I did like it—I just didn’t love it! For those who don’t know, Ice Cool is a flicking game where three players take the role of penguins running around the school halls collecting fish, while another player takes their turn as a hall monitor, trying to catch the other penguins by bumping into them. The design off the penguins—effectively miniature Weebles—means it’s possible to flick them in ways to make them do tricks: you can curve round corners, lean to one side to catch a penguin just out of reach, or even flick them on the head to flip over walls—which is explicitly allowed in the rules. If you’ve got kids, this is a great game you can play with them where you’ll enjoy yourself just as much as they do, at least for a couple of rounds. If you haven’t got kids, but you like penguins, you’ll probably have fun with this too. And if you don’t like penguins: what kind of a heartless monster are you?